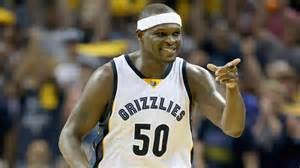 It’s the off season. Pre-draft workouts have commenced, and the draft is upon us. The title has been awarded. Most of the talk around town is will he/won’t he Gasol. We all have notions and opinions of players. Flashy, opulent. There are legends being made on the court. Generally attention off the court is awarded to bad behavior. Not often do the titles of NBA player and philanthropist and good businessman coincide.

Zach Randolph started his professional career with the Portland TrailBlazers. The JailBlazers as they were known at the time. He made a name for himself being difficult, and prone to run ins with the law. Dime bags, firearms, women,  and a killer collection of rides.

Randolph had a rough and tumble upbringing in Indiana. His absentee father, incidentally a Memphis native, had little influence on his son in any positive manner. Randolph was picked up for shoplifting as a youth, after being bullied mercilessly for wearing the same pants day in day out. The chance at NBA money was a dream come true, and Zach Randoloh was ill equipped to handle it.

Coming to Memphis was a chance at a fresh start. Memphis is one of those big small towns. Once we know your face, we know your business. The evolution was rather fast. Minor infractions paled in comparison to the charitable community work being instrumented by Zach Randolph.

Of our Grizzly players, Randolph is far and away the most philanthropic. He works not only on behalf of organizations such as MIFA and St. Jude, he also engages in personal charitable pursuits. From taking children on shopping sprees at Toys R Us, to Angel Trees, turkeys to spa and pedicure parties for battered women. Zach Randoloh has made his mark on our community.

In addition to philanthropy, Zach is also an intelligent businessman. He deferred 25 million dollars of his salary from the TrailBlazers, and still receives money from that astute decision. Last year during contract negotiations, Randolph not only took a veteran pay cut, but also deferred part of his Grizzly salary. Which, incidentally, is instrumental now in the Gasol negotiations. The salary cap does not expand until next year, which is why Mike Conley is not currently committing to new contracts. The deferment opened the availability for Gasol to be offered the maximum. Conley waiting to renew until next year does the same, and also insures that max money will be available to keep Conley.

During the regular season I had several conversations with Zach Randolph about money. We talked about young guys coming into the league with nothing, and suddenly having the world at their disposal. About how he had been that player. That money was the initial goal. That it meant mothers and sibling, while families would be saved from economic despair. How it’s so easy to let the glitz overwhelm a young man. We talked about how hard it was to decline opulence and availability. That there’s no entry seminar for young guys coming into the league in how to deal with the financial windfall. That there’s no one to remind these guys that basketball is a cruel physical mistress that can end your career in an instant. That injury doesn’t care that you’re a superstar. For many of these men there is no back up plan. There should be a class for these young men. That financial advisors are great, but that you have to know how the systems work. Many men have fallen to an advisor they trusted. Vince Carter fell victim early in his career, and recently Tim Duncan.

There should be a class, we agreed. This summer, in Las Vegas, Zach Randolph, is participating in, and leading that class.