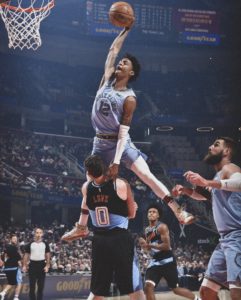 Memphis Grizzlies rookie phenom Ja Morant takes a stand against white supremacy. Morant sent a poignant letter to a Kentucky judge asking for the removal of a Confederate statue that sits downtown in Murray, Kentucky.

Morant spent his college career at Murray State University before being drafted by the Memphis Grizzlies as the second overall pick in the 2019 NBA draft.

The South Carolina native is projected to be the 2019–2020 Rookie of the Year.

Morant’s letter can be read in its entirety below: