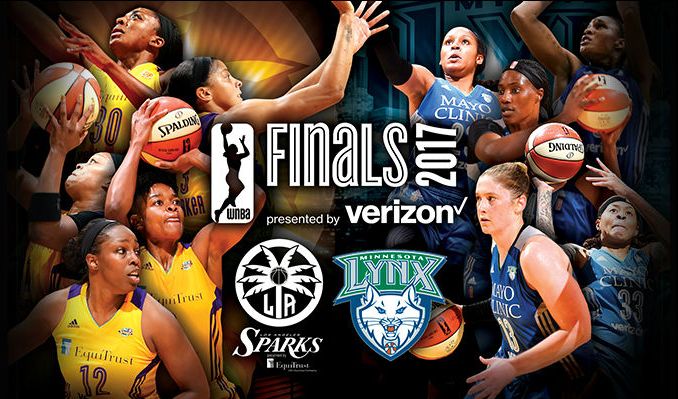 I’ve been slacking a bit in my WNBA coverage, but tonight’s game 4 in the WNBA Finals is a pivotal one.

Friday night the Los Angeles Sparks put on a show on their home court as they dominated the Minnesota Lynx in Game 3 of the WNBA Finals.

The first two games of this series had been decided in the last seconds of the game, by one and two points respectively, but such was not the case for this third game, as the Sparks came away with an 11 point victory under the bright lights of Staples Center.

The Sparks made fireworks on both ends of the court, and when the final seconds elapsed there would be no question as to who the victors were.

For the Sparks, four of their starting five finished the game in double digits, and they lead the Lynx in scoring from wire to wire.

Chelsea Gray finished the night with 14 points and a team high 7 assists.

Alana Beard was the only starter who didn’t score in double digits, with just 5 points, but she made up for it with 8 rebounds, 6 of which came from the defensive glass.

Candace Parker did a little bit of everything, with 13 points, 7 rebounds, 5 assists, 5 steals, and 3 blocks.

Including this monster block against Minnesota rookie Alexis Jones in the 4th quarter:

What happened to the Lynx in Game 3, and can they claw their way back and force a game 5 back on their home court on Wednesday?

Maya Moore got into foul trouble early in the first half racking up 3 quick fouls in the 1st quarter, and would eventually foul out of the game late in the second half. Moore would lead the Lynx in scoring with 16 points, all of which she scored in the second half, including shooting 2 of 2 from 3 point range.

MVP Sylvia Fowles added 15 points and 11 rebounds, and Rebekkah Brunson contributed 6 points. Lindsay Whalen and Seimone Augustus would both finish the game scoring a combined 0 points. This is not ideal, to say the least.

The Lynx did get a boost from its bench, who scored 27 of the team’s 64 total points. Renee Montgomery led the bench in scoring with 12 points, and rookie Alexis Jones contributed 9, all from behind the 3 point line.

If the Lynx want to keep themselves in this series tonight against the Sparks, they are going to need to defend without fouling, and definitely will need a more efficient offensive effort from Whalen and Augustus.