Grizzlies vs. Bucks: The Comeback 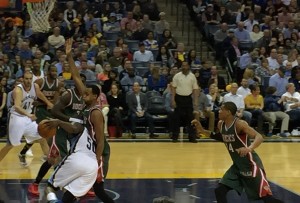 The Memphis Grizzlies returned to form last night against the Milwaukee Bucks.  After resting Marc Gasol, Zach Randolph, Tony Allen, and Mike Conley on Thursday night against the Wizards, all but Conley returned to the floor. Mike Conley is nursing a left ankle sprain, a nagging 3 month injury that was aggravated against the Boston Celtics. Conley reports that he’s eager to return to play, but doing what’s necessary to be healthy for the postseason. 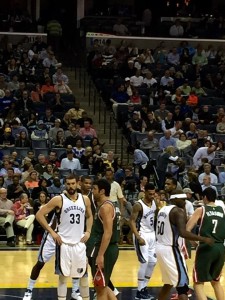 It’s safe to say that the loss against the Wizards reignited a stalled Grizz offense. Let’s talk about Tony Allen. The Grindfather returned to the FedEx Forum with a vengeance. T.A. is a baller, shot caller, brawler. Memphis knows Allen mostly as a supreme perimeter defender, Kobe Bryant credits our Grindfather as being the most difficult defensive opponent in the league. No matter the player status, Allen will shut and lock it down. After having some control issues early in the season, he is fully focused. When Allen played with the Boston Celtics he was also a dependable OFFENSIVE player, consistently putting up double digits. The days of Tony struggling to lay it in are over. Last night against the Bucks the Grindfather had 3 beautiful, powerful trips to the glass to slam it down. He sent the message to the Bucks (hello O.J. Mayo!) that Memphis is the only Grindhouse in existence. Disrespect will not be tolerated. Any issue between Tony and Nick Calathes has passed, and their bromance has returned. 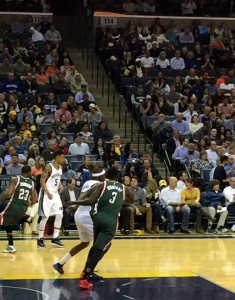 Courtney Lee also returned to hot, having been disappointingly inconsistent since the All-Star break. He had all but pulled completely away from the perimeter, favoring the pull up or fade away jumper. We’ve also seen Lee defer the ball completely. When one of the best three point shooters in the league is shooting jumpers, that’s a problem. Last night Courtney was throwing it down. He shot a team high of 17 points, including 2 of three from beyond the arc. Lee’s sweet spot is from the right hand baseline, and the Grizz generally push the offense to the left, unless setting up Lee, or Jeff Green, from the right baseline. The Grizz are 19-3 when Courtney puts in work from beyond the arc. There is so much talk of the Grizz needing a shooter, we have Courtney Lee, what we need is for him to be consistent. 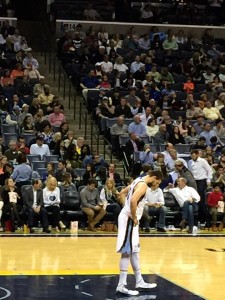 Marc Gasol, Grizz beloved All-Star, passed his older brother and Grizz alumni for third in Grizz history for total minutes played, logging in 19,920 minutes on the hardwood. Gasol put up solid play with 15 points (6 for 12), 7 assists, and 7 rebounds. There was a point when there was a collective gasp of horror throughout the Forum when Gasol had to stop play and exit the court grimacing in pain, and holding the right knee. On the bench ice was applied to the knee for several minutes before Gasol was removed to the locker room to be examined by medical staff and Grizz trainers. While Gasol did return to the court and put in a solid performance, the move was concerning. This is the second time a decision has been made to return a player to the court after exiting in pain. The first was against the Celtics when Mike Conley had to be carried off the court. The second was Marc’s return last night. Analytics apply to injury as well. Risk assessment must be put into play. Our guys are not ones to complain, willing to push through pain in the name of competition. There was not a player in the locker room last night that did not have ice strapped somewhere. Someone must be the voice of reason. Just because you can play doesn’t mean you should. 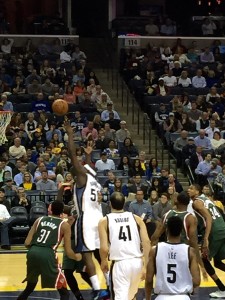 Zach Randolph’s beast mode was in full effect last night has he maintained a no entrance policy in the paint. Do not pass go, do not collect 2 points. Beno Udrih had a solid performance, getting the start over Nick Calathes. Udrih netted 14 points. Memphis is 5-1 when Udrih is in the starting line-up. Jeff Green also popped off for 15 points. Green also collected a technical foul in the third quarter for delay of game. Vince Carter is also experiencing a resurgence after healing up a left foot tendon injury. You can never count Vinsanity out. He is half man, half amazing after all. Last night was the most hustle we’ve seen thus far out of Carter.

Overall, last night served as reassurance that rest does a Grizzly good. All Heart in Hoop City looks forward to seeing you at the Forum tomorrow night as we tip off against the Denver Nuggets at 7 pm.