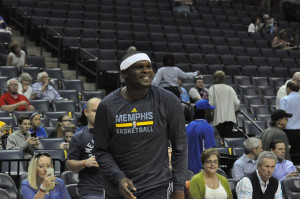 The next 5 games are critical for the Grizzlies playoff seeding and may be the key to their championship aspirations. Which Grizzlies team will make an appearance as the regular season comes to an end?

In this edition of In Shy’s Corner, I will discuss what the Grizzlies should do to maintain momentum at the end of the regular season and going into the playoffs.

In the win against the Pelicans, the Smash Brothers (Marc Gasol and Zach Randolph) combined for 30 points, 21 rebounds and 12 assists. They both were engaged from tip off. The duo also played well defensively. Zbo had a team high 2 steals and Marc had a team high 2 blocks. Having the Smash Brothers in sync equals unequivocal success for this team. Both Marc and Zbo must be aggressive on the offensive end in all of the remaining games. Neither can take nights off. They must be the dominant big man tandem we all know and love. They have to set the tone as leaders of this team.

Consistency is also crucial the rest of the way. For the Grizz offense to flourish, Mike Conley and Courtney Lee have to be consistent. Both have to be effective in order for the offense to have an even flow. Mike has the ability to take over games when the Grizzlies need him to. Courtney has to continue to be aggressive and find his shot. His 3 point shooting is crucial. The Grizzlies win more games when he shoots 2 or more threes. Grizzlies want him to remain confident and take more open shots. Both Mike and Courtney must also be vigilant on the defensive end as well. They have to be disruptive and create turnovers. As we know, good defense by the Grizzlies leads to better offense for them.

Tony Allen is still out with a hamstring injury and his return is uncertain. We all know TA gives his all every night he’s on the floor. His defensive presence is well known and is downright contagious. The other guys feed off of his energy. The Grizzlies have missed him since he’s been out. Hopefully, he will be ready come playoff time. He’s vital to this team in more ways than one.

Jeff Green is the X factor. Whether he’s starting or coming off the bench, the Grizzlies want him to be engaged and confident. He’s found his groove and has been flourishing as of late. Because of his length and versatility, he’s being used to guard positions 1-4 lately. And that has worked out pretty well. Grizz killers Russell Westbrook and Tyreke Evans were held in check when he guarded them. Jeff’s ability to get to the rim has helped this team tremendously. He’s either getting highlight dunks or drawing fouls to get to the line. His three point shooting has been effective as well. Jeff have to continue what he’s doing to help this team win.

If the Grizzlies can manage to have a balanced attack by these players, they will be hard to defeat.

The bench is excellent defensively but struggle at times offensively. They have to be clicking in all cylinders on offense as well. It’s imperative for Vince Carter and Beno Udrih to score efficiently for this team to have a chance. This bench has to be as effective as the starters on the offensive end. Someone has to step up.

Kosta and Nick wreak havoc defensively. Kosta is great on the boards and is a good rim protector. Nick Calathes has been causing major problems for the opposing offenses because he’s pesky and more than likely will come up with steals. These two have to contribute on the offensive end. They have the ability to do that. Kosta must finish strong at the rim and Nick needs to have better shot selections.

Double figure scoring from multiple players on the bench combined with a balanced attack from the starters is a recipe for winning.

The Grizzlies are in control of their own destiny. If they win their remaining games, they will secure the 2nd seed in the West. By winning, they wouldn’t have to depend on any other team to help them succeed.

Regardless of where they are in the standings, they have be the team willing to fight and grind their way to wins. Mediocrity cannot be accepted at any point from this team. This team has to take a proactive approach to achieve their goals right now or they will have an early summer vacation.

Attitude is everything. The Grizzlies can’t have an underdog mentality going into the postseason. They have to believe they can beat any team on any given night. If they continue think of themselves as underdogs, how can they ever be champions? A different mindset has to be established as they move forward. They have to decide if they will remain underdogs or are they legitimate contenders in order to be NBA champions.

The fate of the Grizzlies will be determined by themselves. They have the keys to the car and can’t be scared to drive it. This team have to avoid bumps in the road as their journey to the postseason begins. A balanced attack every game, bench production and the avoidance to the underdog mentality will get them closer to greatness. They can’t be contenders with a pretenders pretenses. We don’t bluff is a great Grizz slogan and this team can’t bluff their way into the playoffs.

Fans need to see the cohesiveness and confidence we know this team has within. Most Grizzlies fans still believe in this team. All we want is the return of All Heart, Grit..Grind!! Do they still have that grind in them? The Grind to Greatness starts NOW..ARE YOU READY?