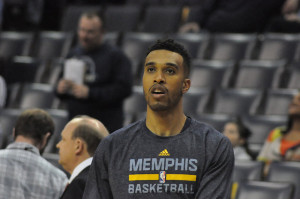 The Memphis Grizzlies will take on the OKC Thunder tonight in Memphis at the Grindhouse. The Grizzlies are in a fight with the Houston Rockets for the number 2 seed in the West and the Thunder is fighting to maintain the 8th and final playoffs spot in the West.

1) Defend the three point line and not gamble on defense. Grizz cannot let the Thunder get hot from the perimeter. Players should play man to man and not leave shooters open for wide open threes.

2) Limit turnovers. This can’t be said enough..have better control of the ball. The Thunder will make the Grizzlies pay off of careless turnovers.

4) Spacing has to be better in order for Marc (Gasol) and Zach (Randolph) to do their magic down low.

5) Everyone should help out with rebounding. It shouldn’t be left up to Zbo. Guards need to get involved more as well. Grizz need to limit the Thunder offensive rebounding. Second chance points by teams has been a problem for the Grizzlies.

6) Defend Westbrook as best as possible. Courtney Lee and Nick Calathes should be the ones guarding him since Tony Allen is not in the line up.

We need to see the best big man duo be dominant. Marc must be aggressive on both ends of the floor. I’m expecting a big game from him. Zbo must make the Thunder pay for double teaming him in the post. Looking forward to a 20 and 10 game from him. Also, I expect him to have a high assist night.

Mike Conley must take over and get the shots he want. The game will be nationally televised and he should show why he’s one of the best point guards in the league. Grizzlies fans already know this to be true.

Courtney Lee must continue to be aggressive. In the last game, we have glimpses of his aggressiveness. He need more confidence in his 3 point shot. The Grizzlies offense is potent when he’s clicking offensively.

Jeff Green should be confident in his shot and make plays at the basket. It would be nice to see more highlight dunks.

The Grizzlies bench need to be good on both ends of the floor. Vince (Carter), Kosta (Koufos) and Beno (Udrih) all at least should get to double figures.

This game is a must win for both teams. It will come down to who wants the game more. Grizzlies fans want the division banner but the players will much rather have the championship banner, a trophy and a ring. A win tonight will put them closer to that goal. They have to play for 48 minutes and be consistent on both ends of the floor. It will be like a playoff game in early April and the Grizzlies must rise to the occasion. Grit and Grind must reign supreme tonight for the home team as the Grind to Greatness continues….

Where:  The Grindhouse aka The FedEx Forum, Memphis, TN