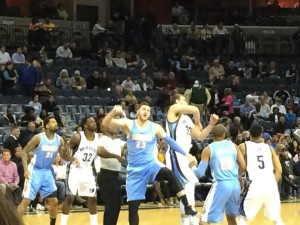 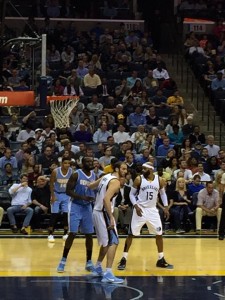 Coming into Monday’s night game, it was announced that Coach Melvin Hunt of the Denver Nuggets would be resting Kenneth Faried, Danilo Gallinari, and Ty Lawson. Knowing the contributions that these players make to that organization, one would assume that the Memphis Grizzlies would fairly easily maul the Nuggets, early (even with Mike Conley missing from the rotation). Although the game started slowly for the Nuggets, such was not the case. On Sunday night, Hunt rested Randy Foye, Darrell Arthur, and Wilson Chandler in New Orleans; the Nuggets went on to win in double OT. The Nuggets have gone 6-2 under the leadership of Coach Melvin Hunt. Hunt took over as head coach following the termination of Brian Shaw. This was the third meeting of the Grizzlies and the Nuggets (one win for each), but the first since Hunt was named as head coach.
Even without their leading rebounder (Faried) and their leader in points, assists, and steals (Lawson), the Nuggets were able to stay in the fight against the Grizzlies. There was point in the 1st half (about 7 minutes left in the 1st quarter) that the Nuggets were shooting at a staggeringly low 8%. Yet, the athleticism and will of the Nuggets allowed them to erase a 10 point deficit and take the lead at the beginning of the 2nd half. The Grizzlies went scoreless for nearly 5 minutes until Zach Randolph made a shot and was fouled on the play. From there, the two teams would go back and forth going on mini runs throughout the half. At one point in the 2nd half, it looked as if the game just might slip away from the Grizzlies. Frustration amongst the Grizzlies due to turnovers, missed shots, and botched plays was evident to even the casual observer. It looked as if the Nuggets just might steal one from the Grizzlies at the Grindhouse while resting arguably 2 of their most valuable players. Then, the grit and grind that the Grizzlies are famous for took over, and they closed out the game with a 92-81 win.
All Heart in Hoop City spent some time in both locker rooms listening to what both teams’ coaches and players had to say pre and post game Monday night. Here’s what we heard:
Grizzlies’ Coach Dave Joerger pre-game on getting the win:

“We need to win. We need to win tomorrow. We need to win as many as we can get. Portland’s jumping up in there. Hopefully, we’re growing, and we’ll win some momentum going forward.”
This needs no explanation or translation.  After the win against the Nuggets, the Grizzlies record is 47-20.  As the Grizzlies push toward the end of an 82 game season in the highly competitive Western Conference, winning is imperative. EVERY game counts…even when you’re in the 2nd spot.
Nuggets’ Coach Melvin Hunt pre-game on guarding Zach Randolph:

“You don’t guard him with one guy. You guard him with a plan, with a system and with your teammates. I think our guys will be up for it.”
Randolph was the Grizzlies’ leading scorer and rebounder Monday night with 21 points, 16 rebounds, 2 assists and 2 steals in 38 minutes of play. ZBo conquered the plan.
Coach Joerger on the momentum shift at the timeout with 7 minutes left in the game:

Zach Randolph on the final minutes of the game:

“We just buckled down. We hit shots and got stops. They fought hard tonight. We didn’t hit shots together as a team. We just played hard and got the stops when we needed to.”

The Grizzlies saw that game slipping away…fast. They came together as a team and rectified it. Randolph summed it up best, “We just talked to each other. We got our composure together and went out and won the game.”

Coach Hunt on the Grizzlies outrebounding the Nuggets:

“If you give up 20 offensive rebounds to a team in their house, it’s going to be hard. The 20 rebounds really, really hurt us because it gave them extra possessions. This is the Grindhouse. They grind you down; so the fewer possessions you give them, the better opportunity you have to win the game.”
The Grizzlies outrebounded the Nuggets in both of the games played in Memphis. The Nuggets outrebounded the Grizzlies in Denver. Keep in mind the Grizzlies leading rebounder, Zach Randolph, didn’t play in that particular game.
Nuggets’ guard Randy Foye on Tony Allen:

“You gotta give a lot of credit to Tony Allen; he really changed the game. That’s something that we talked about before the game. You knew what ZBo and Marc were going to do, but a guy like Tony Allen, you gotta keep him off the boards and try not to put him in situations where he gets steals. He did both of those tonight.”

“I think there is always room for improvement. We can be better. We tend to let teams get the edge over us before we start playing like we want to win. Some days we are not going to be able to bounce back like that. I thought the crowd got into it, and we were able to make a run. We have to put our feet on these teams that we are supposed to beat early.”
The Grindfather has spoken. Nothing else needs to be said.
The Grizzlies play in Detroit against the Pistons tonight at 6:30 p.m. Don’t miss it!

Carmen was born and raised in Memphis.If the Grizzlies are playing at the Grindhouse, you'll almost surely find her there.