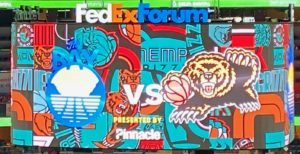 After a win Friday night that landed them in the eighth seed in the Western Conference, the Memphis Grizzlies set out to win another game Sunday afternoon.  The visiting Golden State Warriors came into the game with the league’s longest losing streak.  The home team had the league’s third longest winning streak.  This could’ve easily been a letdown game like the last time the Warriors came to Fed Ex Forum this season.  “These guys realize what happened the last time Golden State was in the building.  So, they see it as an opportunity to go out, compete, and get better”, said Coach Taylor Jenkins before the game.

Go out, compete and get better is exactly what the Grizzlies did.  After an incredibly slow start with less than ideal shooting, the Grizzlies went on to defeat the Warriors, 122-102.  The Grizzlies have now scored 110+ points in eleven consecutive games.  Notably, the streak marks the longest for the franchise, as well as the longest active streak in the NBA.

It Was a Team Effort

The consensus among the team is that the win was a team effort.  No matter which player you asked, they all commented that it was a team win.  Jonas Valanciunas led the Grizzlies with 31 points (13-17 from the field) and 19 rebounds in just under 29 minutes.  He had a season high 9 offensive rebounds.  Valanciunas also blocked two shots, had one assist and one steal.  “It was a team win”, said Valanciunas.  “It was not just running a play for me or someone else.  You just shoot the ball, play together, find the open man.  As I said earlier, it’s fun to play that way.  The ball was coming to my hands.  Tonight was my night.  Maybe the next night, it’s going to be someone else’s night.  We play that way; so, it’s to our advantage.”

Jaren Jackson Jr was the team’s second leading scorer with 21 points (8-15 from the field), 5 rebounds, 2 blocks, 2 assists, and 1 steal in just under 28 minutes.  Jackson continues to shoot the three ball well.  He was 3-6 from three in Sunday’s game.  He’s now had 28 consecutive games with a made three point shot, which is just three games behind the franchise record of 31 games currently held by Tyreke Evans.  Jackson was asked about what changed in third quarter when the Grizzlies outscored Warriors 35-17.  “I don’t really think anything changed honestly between the first and second half”, said Jackson.  “We just played smarter.  We weren’t really playing that smart early.  And then we just played smart and took better shots, moved the ball, and everyone was eating.”

“You take every game and enjoy the moment”

Although he didn’t have a great shooting night (4-12 from the field), Ja Morant had another double double with 11 points and 10 assists.  Morant was also able to pull down 7 rebounds and had 1 steal.  This was Morant’s sixth double double of the season, and it was his seventh game with 10-plus assists.  It’s worth noting that no other rookie this season has a game with 10-plus assists.  Morant commented on whether sharing the ball was contagious throughout the team.  “We’ve just got an unselfish team”, Morant said.  “We just take what the defense gives us.  We’ll give up a good shot for a great shot, and it’s showing in our assist category, and it’s a bonus for us.”

“We just have an unselfish team”

The Grizzlies bench was solid once again.  They outscored the Warriors bench 47-32.  Coach Taylor Jenkins commented specifically on the progress of DeAnthony Melton during his post game press conference.  Melton scored 10 points (4-9 from the field), had 5 assists, grabbed 3 rebounds, and had 2 steals and 2 blocks.  “When we welcomed him into our program, we knew he was going to be an impactful player.  You’ve heard me say that probably a million times”, said Jenkins.  “It was really just trying to find the opportunity for him.  Obviously coming back from injury maintenance to start the season, he didn’t really get his shot right off the bat.  But all the work he put in, opportunities in the G-League, what we were seeing in practice, we knew that when the opportunity came that he was going to be a disruptor on the defensive end.”

Notable Quotes from the Other Side

After the game, Warriors head coach Steve Kerr was asked about the Grizzlies’ performance.  He said, “They were fantastic tonight in the second half.  They are having a really special season when you think about it.”  The championship coach went on to say, “They are one of the best stories in the league this year.  What they showed us tonight was a complete effort.”

The visiting head coach was also quite complimentary of the Grizzlies’ progress.  He was asked about the difference in the Grizzlies since the last game in Memphis.  Kerr stated simply, “Confidence.  When we were here six weeks ago, or whenever it was, they were not a confident team.  Now you can see they believe in what they are doing.  They believe in themselves and each other.  I believe they are in the eighth spot right now if I’m not mistaken.  So, they’re playing for the playoffs.  They’re playing for each other, and they’re on a great run.”

The Grizzlies will continue their home stand with a game against the Houston Rockets.  The game will be Tuesday night at 7 p.m. CST and will be aired on NBA TV.