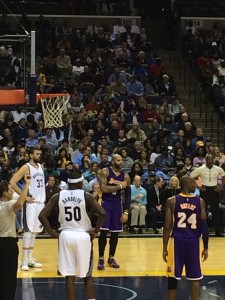 The Grizz have won the last 8 out of 10 Lakers match-ups. The last two this season. Mike Conley Jr. posted up averages of 22 pts and 56.4 percent shooting in the last three match-ups with the Lakers. Marc Gasol posted double-doubles in 3 of the last 4 Lakers contest. Kobe Bryant shot just 5 of 15 in the first game against the Grizz this season, and posted 28 points the second.

Zach Randolph remains questionable with a sore right knee, having missed the last 5 Grizz appearances. The team has split games without the big guy, having lost 4, and broke the streak with big wins against the Heat and Spurs. Marc Gasol is probable this evening after missing practice due to illness.

The Lakers see the probable return of Ryan Kelly, who’s been out due to hamstring injury. Former Grizz, Ed Davis will be sporting a face mask due to a broken nose sustained during Tuesday’s game against the Nuggets. We should expect Kobe Bryant to play limited minutes, as coach Byron Allen has been resting him after injury, and to keep him fresh. Tonight also marks the debut of Tarik Black, formerly of University of Memphis, in Lakers uniform after being acquired from the Houston Rockets. Black is expected to play at the center position in the rotation.

I wanna be like Mike…Conley! After being called underrated for most of his career, Conley is shredding the term. He is a force to be reckoned with, and has proven his ability in clutch moments. He is our general, and has responded well under the direction of Coach Dave Joerger. Posting 16 points in the first quarter against the Spurs, Conley finished with 30.

Marc Gasol for MVP. You’re thinking it, I said it, even ESPN has noticed Big Spain. Leaner, meaner, Gasol is top form. His beautiful sky hook reminds me Dr. J. 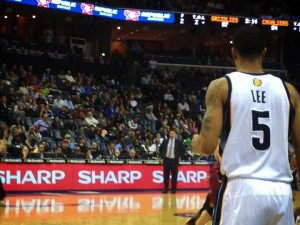 The Grizz bench is deep this season. Although plagued by inconsistency, Courtney Lee is once again finding his rhythm. While he falters when inside the key, his confidence outside it has returned. We need it to remain. After a sluggish season last year, Tayshaun Prince is shining. He is being well rested, and used in limited minutes, and the result has been beautiful play from our veteran. The same can be said for Vince Carter. Vinsanity can run hot and cold, but when he’s hot, get out of the way. Comfortable at the clutch on the perimeter, Carter posted an NBA top ten highlight dunk against the Heat.

Tonight’s game is one we should be able to put in the books. The Lakers are 10-22. Repeat 10-22. Oh how the mighty have fallen. However, it’s never a good idea to turn your back on the Black Mamba. He’ll bite you, and his army will show up to fight you. Even Lakers point guard Jeremy Lin has publicly commented on Bryant’s drop off.

Although against the Spurs, the Grizz managed to defend the perimeter; we’ve struggled there all season. The key must be defended like that of a home owner defending his property against a shooter. Because shoot the Lakers will, and if left open, that perimeter will be the gateway for the Lakers. Force the Lakers to shoot inside the three, and they struggle. The Lakers take a high number of shots per game, and Ed Davis will be there to grab any that fall short. Without Randolph, Gasol and Koufos will have to defend the offensive rim and limit second chance buckets. The other area to watch is the free-throw line. The Lakers are excellent free throw shooters, limiting time at the line counts. Often it’s that line that determines close games. Let’s spread the floor, and please, it’s so predictable, stop moving the ball to the left every offensive play.

Grizz v. Bulls: The Battle of the Gasol Brothers

Grizz v. Bulls: The Battle of the Gasol Brothers