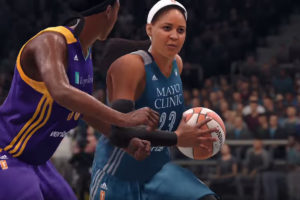 Coming Soon to a Controller Near You: EA Sports Announces WNBA Rosters Will Be Included in NBA Live 18

I know it’s been a little quiet around here lately, so here’s one for the Cool Basketball Things file:

EA Sports and the WNBA announced today that the soon-to-be-released NBA Live 18 game will also include all 12 WNBA teams.

You can play as any of your favorite #WNBA players for the first time ever starting Aug. 11! #WatchMeWork pic.twitter.com/gO9lDaQpsX

The official release date of the game has yet to be announced, but it appears to be slated for later this month or early September.

This is long overdue in the sports video game world, and EA Sports deserves some props for it.

You can check out the official page here: https://www.easports.com/nba-live/wnba