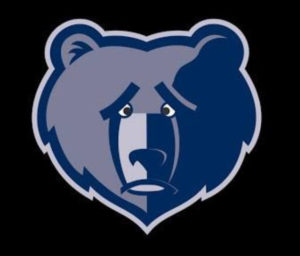 Grizzlies Lose 123-108: Memphis Simply Got Blasted By the Rockets

Saturday night Memphis simply got blasted by the Rockets. Memphis started the game strong, having a solid first half. However, the Rockets would spend the second half of the game picking the Grizzlies a part. As with many of Memphis’ losses they did not play their brand of basketball. Despite double digit scores from Conley, Gasol, Allen, and Green the Rockets aggression was just too hot for Memphis to handle.

The Good: JaMychal Green had him a game! Green scored his first double-double of the season. He finished the night with 20 points and 10 rebounds. Next to Mike Conley he was the team’s leading scorer. Green played aggressively and he finished the night shooting 81.8%. While Green does not quite have the capability to take over a game and mount a comeback but he certainly put forth the effort on Saturday night.

The Bad: You’ve got to take care of the ball. Memphis was reckless with the ball on Saturday night. They made some tough passes, got pick pocketed a few times, and just simply weren’t aware of defenders. The Rockets walked away with 10 steals on the night and 18 points off Memphis’ 13 total turnovers. In a tight game, against a team that has ability to run away with it, taking care of the ball is paramount. While Memphis averages 13 turnovers per game you just don’t get to have that flexibility when you are down to a shooting giant like the Rockets.

The Ugly: It was not a great night for the Memphis Grizzlies defense. The Rockets finished the night shooting 50% overall and 42.9% from the three-point line. They scored 18 threes, many of them coming at pivotal points in the game. As a result, the Grizzlies never had a chance to start to mount a comeback. James Harden and Eric Gordon combined for 12 of the Rocket’s 18 three-pointers. In addition to Houston’s normal weapons against Memphis, Clint Capela, Houston’s young center, got a season high 24 points. Granted, he picked up eight of his points at the free-throw line when the Grizzlies attempted to hack him to try and get back in the game. However you dice it is was a great night for the Rockets’ offense and it was a tough night for Memphis defense. Just to re-iterate, check out Houston’s shot chart for the night. They got to have their way when on shot selection because it sure would have been nice to see the Rockets take a few more mid-range jump shots. 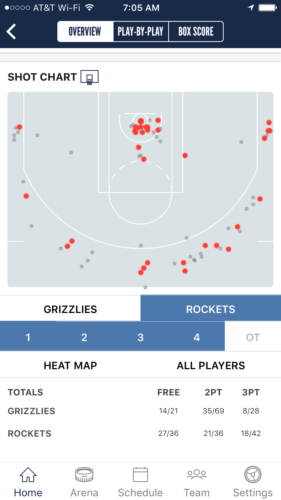 Memphis continues to excite and disappoint at will. If you ask me, it’s just comes with being a part of this fan base. These are not the best of times, and they are not the worst of times. The season is far from over and it seems like the Grizzlies still have some growing pains. Let’s just hope they get through them before the playoffs.

Tabitha was a Memphis transplant who fell in love with the Grizzlies when she moved to the 901. She now resides in Houston where she frequently finds herself in debates with Rockets fans.