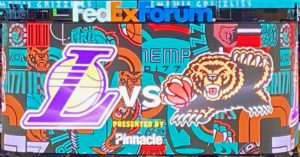 The Memphis Grizzlies closed out a four game home stand Saturday night against the Los Angeles Lakers.  The Grizz won the first game of the home stand by one point (Jazz), saw two bad losses in the middle (Nuggets & Warriors), and lost the last game (Lakers) by one point.

Before Saturday’s game, the Grizz hadn’t played since Tuesday night, which gave them plenty of time to practice.  The home team punched first and got out to a big lead early, pretty much dominating the first quarter of the game.  The Lakers came into the match-up with the league’s best record; so, it’s no surprise that they would fight their way back into the game.

When the teams headed into the half-time break, the Grizz were up by 8 points.  The young Grizz allowed the experienced Lakers to dictate the pace of the second half of the game.  With 2:23 left in the game, the Grizz were up by 4 points, 105-101.  Unfortunately, they weren’t able to hold on for the win.  While there are certainly no moral victories, there were a lot of good things in Saturday’s game.

If we can play like that every night, we got ourselves a chance.

Ja Morant on losing by one point to the team with the league’s best record:

“Tonight showed what type of team we are and who we want to be.  Never satisfied with losing, but I can say I’m satisfied with how we played tonight.  We played together, competed to the end and just came up short.”

“We have to play better on any given night.  I feel like we brought it tonight because of who we were playing.  Good teams bring it every night, no matter their opponent.  So, once we learn from this game, we can continue to build, take this to Indiana and get us a win on the road.”

“We understand that if we bring it we’re always gonna be in ball games.  Little things like that we learn more and more every day.  We have to focus on our effort because our youth and energy can sometimes win out if we’re running hard and we’re playing defense and we’re scrambling and wearing teams down and playing in transition.  So, I think those are the things we’ve gotta focus on.”

Grizz head to Indiana to face the Pacers Monday at 6 p.m. CST.

The Grizzlies Fall at Home to the Mavericks in OT

The Grizzlies Fall at Home to the Mavericks in OT