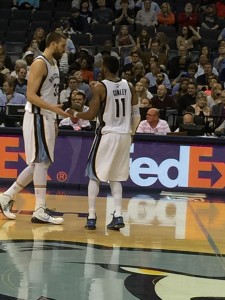 The Sweet, Sweet Taste of Revenge

January 3, 2015 is perhaps a day that most Grizzlies fans would like to pretend never happened.  It was a massacre of sorts in the Mile High City.  It was the second night of a back to back on a West Coast road trip, and to say that the Grizzlies struggled would be an understatement.

Fast forward to January 29…things look much different.  The Grizzlies have won 8 of their last 10 games, largely in part due to the return of PF Zach Randolph, who’s playing some of his best basketball…EVER, and the addition of SF Jeff Green, who’s fitting right into the Grizzlies style of Grit and Grind basketball.  Most importantly, it’s not the second night of a back to back and the Grizzlies will be at home in the GrindHouse not gasping for air in the Pepsi Center in Denver.

Look for this game to be different from the January 3 game in a few ways:

ZBo missed the January 3 meeting due to a knee injury that had him sidelined.  The Nuggets won’t be so lucky this time.  ZBo will be donning the number 50, and if he plays anywhere close to where he’s played since he returned from the injury, the Nuggets have a problem on their hands.  ZBo has hit almost 60% of his shots in his last 10 games (he’s averaging just over 50% for the season).  He’s unstoppable right now, and that’s good news for the boys in the Beale St. Blue.

Jeff Green’s presence was merely a faint trade rumor during the January 3 meeting.  He’s now an integral part of the Grizzlies team.  Green has come right in without hiccup and added a spark to an already improving Grizzlies offense.  As an added bonus, he isn’t doing too bad on the defensive end either.  Green’s athleticism has allowed the Grizzlies offense to expand, and he’s gotten into a rhythm with his 3 point shot in the last couple of games; this could prove helpful since the team went just 2 of 14 from 3 point range in the last meeting.

During the last meeting, Marc had to battle a smugly, aggressive Jusuf Nurvic in Pepsi Center with a Denver Nuggets crowd egging the rookie on.  Marc even got a technical foul.  Marc turns 30…TODAY.  Showing out on your birthday is just understood.  Expect the All Star Center to play at a top level since he’s got his fellow Smash Brother, Zach Randolph, back on the court with him, and a Memphis crowd cheering him on in the background this go round.  Don’t worry about Marc, Nurvic…FEAR THE FANS.

4.  Coach Joerger and the Bench

Not only did Marc get a technical foul in the last match-up, Coach Dave Joerger got two and was subsequently ejected from the game during the 3rd quarter as a result.  Hopefully, the officiating won’t send Coach into a tailspin this game causing him to lose his cool, and he can successfully lead the team to victory through all four quarters by creating some good rotations.

The Grizzlies fans witnessed their bench have a magnificent game against the Dallas Mavericks team in Dallas on the 2nd night of a back to back just two days ago.  The bench was able to generate 43 points in that win.  Bench production wasn’t necessarily horrible during the January 3 meeting with Denver (that game was just a travesty at best), but the way the bench has looked during the last couple of games, the Nuggets should prepare to be shut down.

Tonight’s game will be on TNT.  The TNT crew (Ernie Johnson, Kenny Smith, Charles Barkley, and Shaquille O’Neal) tends to have differing views of the Memphis Grizzlies.  It should be interesting to see what they have to say about the team and how they look as they near the All Star break.  Additionally, the reserves for the All Star Game should be announced tonight.  It would be nice to hear that PG Mike Conley and PF Zach Randolph have earned reserve spots on the Western Conference All Star Team on a night that they play on the network.

All in all, expect a fun night of basketball.  Tonight’s game will be nothing like that January 3 meeting…at least not for the Grizzlies.  The Grind to Greatness continues…fasten your seat belts , stay tuned and enjoy the ride!