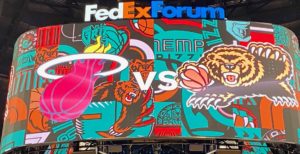 The Memphis Grizzlies were able to split the season series with the Miami Heat with a win Monday night.  The teams last faced each other October 23 in Miami for the first game of the season.  The Grizzlies led by one point going into the fourth quarter that night, but ultimately lost by 19 points after a complete collapse in that quarter.  Fast forward 26 games later and you’ll find the Grizzlies able to sustain a late fourth quarter push from the Heat and win 118-111.

This marks the Grizzlies’ first victory while wearing Vancouver jerseys since April 18, 2001 at Golden State, the franchise’s final game before relocating to Memphis in 2001. pic.twitter.com/SLi2wBpaVJ

Ja Morant and Jonas Valanciunas led the Grizzlies in scoring, and both had a double double.  Valanciunas scored 21 points in 24 minutes (8-9 from the field). He was also able to grab 10 rebounds and block 2 shots.  Morant had 20 points in 32 minutes (9-14 from the field) and had 10 assists.

Jaren Jackson Jr. took 14 shots, and eleven of them were from three point range.  Jackson hit five of those threes and ended the game with 15 points, 5 rebounds, 2 assists and 2 steals.

Brandon Clarke and De’Anthony Melton had solid games off the bench for the Grizzlies.  Melton had 16 points (3-7 from the field), 7 rebounds, 4 assists and 1 steal in 25 minutes.  Melton played an aggressive game resulting in 11 free throw attempts; he was able to hit 9 of them.  Clarke continues to be a consistent force off the bench for the Grizzlies.  Monday he scored 14 points (5-9 from the field), grabbed 9 rebounds, had 1 assist and blocked a shot.

The Grizzlies ended the game shooting 49% from the field (42-86), and they were able to hold the Heat to a 46% field goal percentage (37-81), which is slightly below their average.

Jimmy Butler led all scorers with 25 points, 8 assists, and 4 rebounds for the Heat.

Rookies Kendrick Nunn and Tyler Herro had a productive night for the Heat as well.  Nunn had 18 points and 3 assists, and Herro had 22 points, 5 rebounds and 3 assists off the bench.

Solomon Hill played just 11 minutes for the Grizzlies, but had 8 points and 3 assists.

Coach Jenkins on the win:

Overall, against a really good team, a top five team in the league, to kind of bounce back knowing they were going to raise their pressure with a fifteen point lead and do something different, I’m really proud of our guys and how we overcame.

De’Anthony Melton on how they got the win:

We battled.  We were just battling out there.  We know we can play with anybody, so we just went out there, played together, played hard, helped each other and came out with the dub.

Ja Morant on how Monday’s game differed from other games:

I mean, we just learned.  I feel like we’ve lost a lot of games late in the fourth quarter, up 10 (points), and the other team goes on a run, and we weren’t able to bounce back from it.  So, we’ve just learned from our mistakes to finish the game off.

The Grizzlies are headed out on the road to face the Oklahoma City Thunder Wednesday at 7:00 p.m. CST.