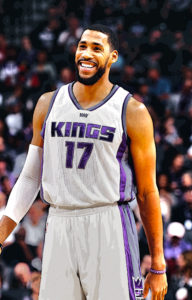 Temple, an LSU alum, put up a career-high 8.4 points per game and shot 39.2 percent from 3-point range this past season. Temple also averaged 2.3 rebounds, 1.9 assists and 24.8 minutes for the Kings.

The 6-6 guard also is on the Executive Committee of the National Basketball Players Association where he serves as a vice president alongside other players. The Rockets, Chris Paul serves as president for the association.

Kings beat writer for the Sacramento Bee, Jason Jones spoke with All Heart about Garrett Temple and what he brings to the organization and the city.

1) What might the average basketball fan not realize about Temple’s game?

Garrett Temple is a really good defender. The Kings were a bad defensive team overall, so that might have been overlooked, but Temple is a good individual defender.

2) What do you think he brings to the Grizzlies organization?

A first-class person who will always carry himself in a professional manner. He’s a great teammate who is respected by many around the league.

3) Grizzlies fan are all about team players being involved in the community? What can they expect from Temple?

Temple was deeply involved in the Sacramento community. He’d adopted Sacramento High School as a place to mentor. It was the school DeMarcus Cousins had become a fixture at before being traded.

Temple was also tied to the community through social action, especially after protesters blocked the doors to Kings games after Stephon Clark was shot and killed by Sacramento police.

4) What do you expect the back-court of Conley and Temple will be like?

If Mike Conley is healthy the Grizzlies will have a solid defensive tandem.

5) What will the Kings miss about Temple?

Temple’s defense and steadying presence in the locker room will be missed the most. The Kings are a young team and Temple was one of the voices of advice and reason for their young players.

6) How well do you think the Kings will fair in the upcoming season?

At this point, the Kings figure to be near the bottom of the Western Conference again. The West is too deep and the Kings haven’t added anyone who will make an impact next season. They’re counting on young players to get better and that usually means a lot of losing.

7) Will the Grizzlies have a better season? How do you like their off-season moves?

The Grizzlies can’t get any worse after last season. They’ll be better, but having the Chandler Parsons‘ contract is a problem, especially if they can’t find a team to make a trade with to unload it. If everyone is healthy most of the season, I think Memphis can sniff around the eighth spot in the West, but it won’t be enough to make the playoffs.

8) What are your thoughts on Jaren Jackson, Jr and Jevon Carter?

Jaren Jackson Jr. showed some flashes of being a special player. Carter looked good in the games I saw him play, but it’s only summer league so I’ll hold out until I see them in real games.

9) Can Grizzlies fans have Zach Randolph back? Asking for a friend…

No. Z-Bo is my homie. You can’t have him back. LOL