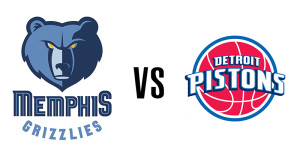 The Grizzlies started out solid against the Pistons in the first half of the game and finished went the half with an eight point lead (57-48). But the second half was a different story especially in the third quarter.

Stats of the game 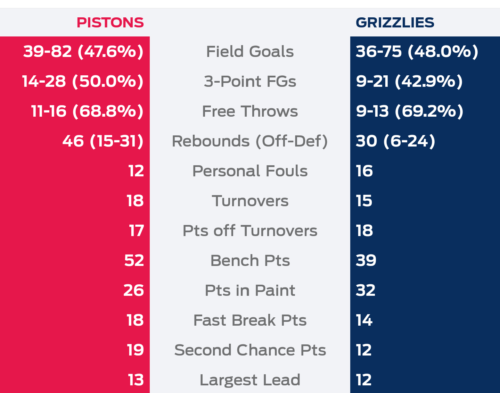 1. Mike Conley led the Grizzlies with 15 points and three assists. Conley has been the Grizzlies leading scorer in 34 games this season.

5. Boban Marjanovic recorded his fourth double-double of the season with 14 points and 10 rebounds.

On the starting lineup:

On the second half:

“Although we knew we’d be limited on minutes today, I kind of thought with that being a restriction we weren’t able to make that run back there and put our imprint on the game. We wanted to see our young guys blossom today and unfortunately came up short, but we saw great things in those guys. Like I said, we’re trying to pull some things out for the long run as far as the playoffs go. I saw some good things in doing that, like I said, paying attention to detail, but we’re preparing for the playoffs.”

On advice for those who haven’t been to the playoffs:

“Just stay in the moment. Pay attention to detail. I know that it’s kind of hard for myself to stand in the huddle and listen… but it counts. Like I said, we just have to play hard for 48 minutes and it will be a good scene going to San Antonio and getting a win.”

The Grizzlies will host the Dallas Mavericks at the FedEx Forum on Wednesday, April 12th for the final regular season game of the season. Tip-off: 7pm CST.