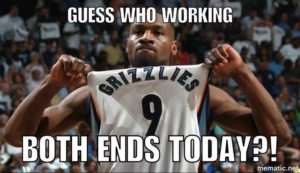 Last night after this game, I thought I was dreaming but for LeBron and the Cavs..it was a nightmare. A shorthanded Grizzlies team defeated the Cleveland Cavaliers in Cleveland.  As Ron Tillery put it in his article: this was “Cleveland’s mistake on the lake”.

The Cavs were stunned and for good reason. The Grizzlies were without Marc Gasol, Zach Randolph, Mike Conley, Matt Barnes and Chris Grizzilla Andersen and they did the improbable.

Most of all, this win showed the resolve and tenacity of this team. The faces change, but the core of what is Grit and Grind thrives through Tony Allen and the mentality that he and others instilled in this organization several years ago now. It is a cultural thing, now- especially when Allen is active and thriving (something that does not always happen, in fairness), they fight and they scratch and they claw more often than not. They are crazy, and they are unpredictable, and they are flawed, and they lost to the Suns the night before in a terrible loss…

“I was (concerned) especially because we had went over everything with the expectation that guys would be in the lineup this morning. We get here before the game and find out that no one, that we pretty much went over, is playing. But we’re professionals. You got to respect (the opponent). We are in this league for a reason. We didn’t respect them tonight and they beat us.”

After the game, the Grindfather himself (Tony Allen):

On how satisfying tonight’s win was:

“Honestly, it was just a game for us to get better. Guys like me, Mario (Chalmers), Lance (Stephenson) and J. Mych (JaMychal Green), we told each other before the game that we were just going to go out there, play hard and go to work as a team. We were confident coming in. When you’ve got all the guys from one through 15 (and) they believe, then the sky is the limit. I thought we kind of caught them off guard in the first quarter and from that point on, we felt good about ourselves and were confident throughout the game.” 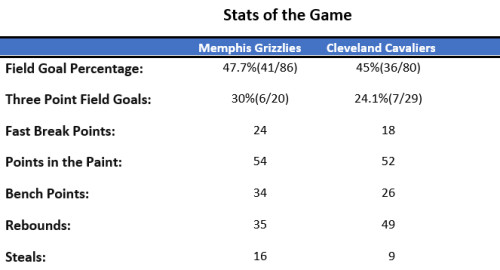 JaMychal Green had a double-double with 16 points (6-of-13), 10 rebounds, six assists, four steals and two blocks.

Lance Stephenson chipped in 17 points (8-of-15), seven rebounds and three assists as a reserve.

LeBron James led all scorers with 28 points (11-of-19), nine rebounds and five assists.

"It's all about grit and grind. It's all about one team, one goal." – @memgrizz' Tony Allen. #GnG #SquadGoalshttps://t.co/auEWESzvMv

The Grizzlies head to Boston to take on the hot Celtics team on Wednesday night at the TD Garden. Tip-Off is at 6:00 PM CT.