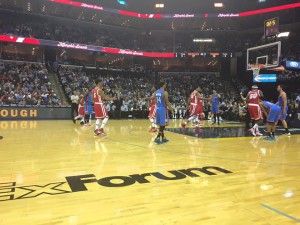 Last night was the first of several Hardwood Classics games this season paying homage to the ABA team the Memphis Sounds.  Beale Street Blue was converted to the Retro Red of the Memphis Sounds for the night.  The Memphis Grizzlies were coming off a road win on Sunday against the Minnesota Timberwolves after winning a thrilling re-match to the Portland Trailblazers at home on Friday.  A win on Monday night would put the Grizzlies back at 0.500.  So, not only were Memphis fans interested in the throwback theme night of the Sounds, they were also interested in seeing the throwback Grizzlies team of recent seasons.  Luckily, the Memphis Grizzlies didn’t disappoint.

The Memphis Grizzlies faced the Oklahoma City Thunder in their first regular season match-up of the year.  The Thunder was without the services of Kevin Durant (left hamstring strain) and Andre Roberson (flu).  The Grizzlies were without Brandan Wright (sore right knee) and both Jordan Adams and Jarell Martin are still inactive due to injury as well.  From the initial tip, both rivals appeared hungry to win the game.  Nothing about that changed throughout the game.  The largest lead by the Grizzlies was 11; it was 6 by the Thunder.  The lead changed a total of 10 times and the score was tied a total of 10 times, as well.  At the end of the night, the Grizzlies were the victors with a final score of 122 to 114.

The Grizzlies had only 22 fouls, while the Thunder had 28.  The Grizzlies also managed to capitalize off their time at the charity stripe better.  They shot 92% from the free throw line (36/39).  The Thunder shot just 71%, hitting only 22 of their 31 attempts.

If you like that Retro Red and you’re looking for the next opportunity to catch the Grizzlies in their Memphis Sounds gear at home, make plans to join them on December 3 as the Grizzlies take on the Spurs.  The Grizzlies have a bit of a break before they play again on this Friday November 20 at home against the Houston Rockets.  With any luck, the team that’s played the last 3 games will carry forth and grow as the season progresses.